Longhorn Beetles usually have long antennae and many species are quite colourful. There are many members in this family: some 15,000 species all over the world. In Western Europa alone some 100 species have been spotted. Longhorn Beetles usually do have very long horns, even though there are exceptions, of course. Many are also nicely coloured and they all give a slender impression. A few Longhorn species are very dangerous. Their larvae eat dead wood and do live inside pieces of wood in buildings. And because you can't see them (they do not make little holes like the woodworm does) and because they can live as larvae for some 5 to 7 years, it may be too late once you spot the adults. Most species however are not dangerous, but live in stems of plants or reet 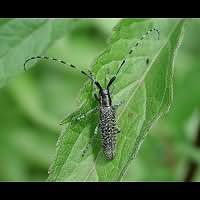 Agapanthia villosoviridescens is a beautiful Long Horn Beetle and common in gardens. more... 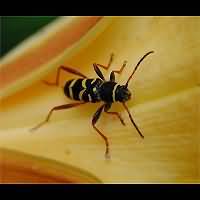 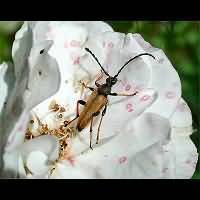 The male of the Red Longhorn Beetle is ochrous brown and not red. The neck shield is black. more... 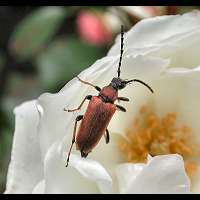 The female of the Red Longhorn Beetle is brownish red, including her neck shield. more... 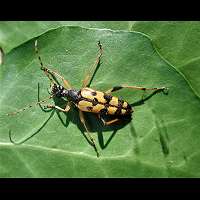 Leptura maculata is a local species. But when present it may appear in great numbers. more... 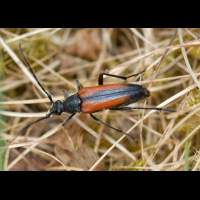 In Britain this Stenurella melanura is a local species in England only. more... 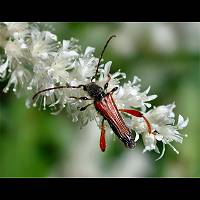 If Stenopterus rufus is present in Britain is something we haven't been able to figure out. more... 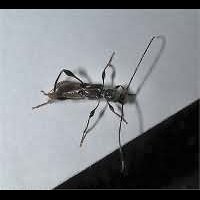 The Spruce Shortwing Beetle is a most peculiar Longhorn Beetle. more... 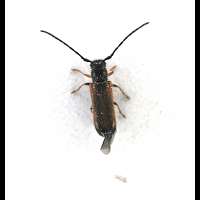 The Plumb Beetle is a small Longhorn Beetle. The larvae often live inside the twigs of plumb trees. more... 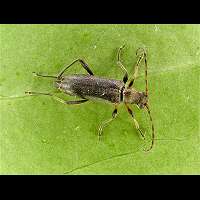 Grammoptera ruficornis is the most common Longhorn Beetle in Britain and Ireland. more... 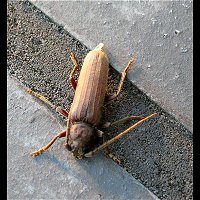 Arhopalus rusticus is a rather big species. more...