We like to thank Peter van der Linden for his great contributions!

Part 1 A shrew in the garden

Our first encounter with a shrew dates back to September 18th, 2000. I was strolling in our garden and a sudden movement attracted my attention. I looked more carefully and saw a little mouse. By standing motionlessly I hoped to see even more of the creature. I was convinced that the mouse would notice me in no time and that it would immediately disappear. But it seemed that the mouse did not care about my presence. In the meantime I realized that it was actually not a mouse but a shrew. Very cautiously I left the spot and ran like mad into the house to get the photocamera. I managed to shoot a few pictures. Although the shrew didn't mind me being quite close it was very difficult to get a good shot. Shrews are continously twitching with jerky kind of movements which is quite a challenge for a photographer. After a while the fun was over as the creature disappeared under the garden shed. 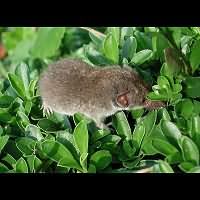 Our very first photo of the shrew (Crocidura russula).

After uploading the photos to the computer I could finally examine the results. I consulted some books to determine the creature that looked to me like either a 'Greater White-toothed Shrew' or a 'Lesser White-toothed Shrew'. These two are very hard to tell apart and even the books told me that both species looked very much alike. But as the Lesser White-toothed Shrew is quite rare in my parts of the country, I voted for the Greater White-toothed Shrew. This was later confirmed by Peter van der Linden. Apparently it does happen more often: a shrew taking a stroll in one's garden. In September 2004 there was another one. Walking about in the grass without being scared of us. Before Hania could get her camera the animal left the grass and went in between the tiles in front of our garden shed. Under the shed shrews have nests constantly. We still do not know what it was looking for between the tiles. We offered the animal a worm, but even though it was looked at, it was not touched, leave alone eaten. After much more ado between the tiles, the animal disappeared under the garden shed. 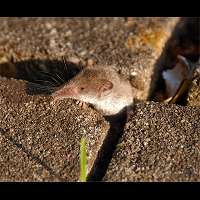 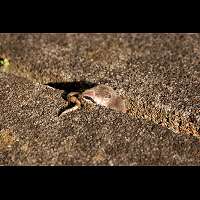 We still don't know what this shrew was looking for...

Part 2 A shrew in the bedroom

The second encounter with a shrew was on November 26th, 2000. It was about 2 AM and my wife and I were asleep. Suddenly we were woken up by gnawing sounds coming from somewhere below the window. Still half-asleep we checked the area but saw nothing so we concluded that the noise must had come from outside the house. We went to bed and were fortunate to get some sleep. At about 4 AM however we were woken up again by gnawing and scratching sounds. I looked around and just saw a small mouse disappearing under the chest of drawers. What now? Hunting for a mouse in the middle of the night didn't appeal to us as you can imagine. So we took the pillows and blankets and went to the guest room to spend the rest of the night there.

In the morning my wife went to the bedroom to investigate the situation. As soon as she entered the room she saw the mouse very much careless if not indifferent on the floor. It was surprisingly easy to catch the mouse by putting a bucket upside down on the floor. Gotcha! It couldn't run away any more. But how to get rid of the mouse with a bucket on top of it? And of course Hania insisted on taking photos of the creature... The trick we used was similar to the method of catching insects with a cup. Very slowly and cautiously we slid a flat glass plate onder the bucket and after turning this contraption we could see through the glass a shrew (not a mouse!) sitting in the bucket. A temporary shelter for the creature to get observed and photographed by us! 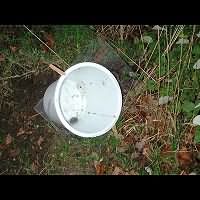 In this 'jail' the shrew did modelling job.

So there we were in the kitchen with the bucket on Hania's lap and the shrew in the bucket. I knew that shrews can stand but a short period of time without food. But what do they eat? Luckily is was a quite warm autumn (first autumn in 100 years with no frost) and there were still numerous earthworms in the compost in the backyard. The shrew jumped ferociously on top of a fat worm we put into the bucket and simply gulped it down within less than a minute. It didn't have to say 'give me more' to us to get another worm. Also this worm quickly vanished into the tiny shrew. It was fun to see that the greed of the shrew. It accepted the food with no hesitation and no fear whatsoever. Even the flash of the camera didn't seem to bother it. 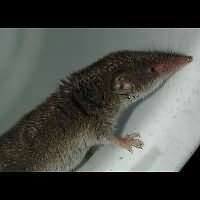 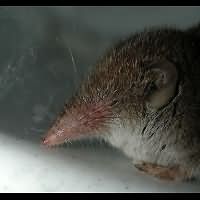 Through the glass on top of the bucket we could take reasonable photos.

We had kept the shrew for a few hours feeding it several times. We noticed how strikingly fast the creature switched from being very active to falling asleep. When it is asleep it sits quietly, a bit rolled up, slightly twitching every now and then. And all of the sudden it wakes up and runs around in its jerky manner again. Another thing we were impressed by was the amount of food that the little creature could eat and als the amount of (unavoidable) dung that it produced. The books mention an unpleasant smell of shrews but we hadn't noticed it at all. The conclusion is that the one we captured was a female, for only adult males produce the terrible smell shrews are notorious for. Of course we avoided touching the shrew with bare hands. 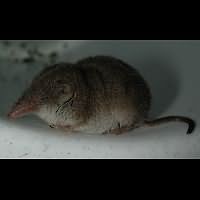 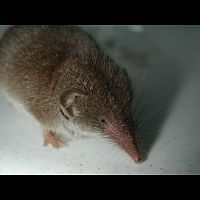 Look at the long whiskers of the shrew.

Now that Hania had already taken several photos and were quite satisfied with the results, she came with an idea of getting an unconventional shot of the creature. We turned the bucket upside down again so that the shrew stood with its feet on the glass plate. It resulted in the following quite remarkable picture. 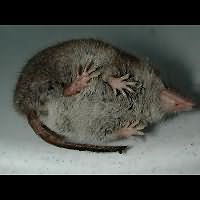 Tiny hands and feet of the shrew look really adorable.

After this last acrobatic action it was time to put the shrew where it belongs -wild nature. But to free the creature in our garden...? No! The shrew already knew the way into the house and one sleepless night seemd more than enough to us. So we got into the car and with the bucket and with the shrew-in-the-bucket on Hania's lap we drove a few kilometers away where we set the creature free in an area with forests and grass lands. As soon as the shrew slowly left the bucket (still showing no fear) it went sniffing though old leaves and grass on the ground probably looking for food again. We were absolutely certain that the whole adventure hadn't affected our shrew at all. By the way, according to an old believe in the United States a period of heavy rainfall follows when a shrew enters a house, for usually they rarely do. We can't remember whether that was true in this case, but it is nice trivia about the species anyway! 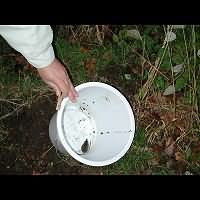 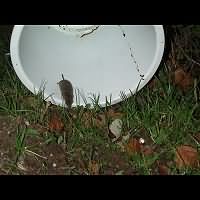 And of course no harm has been done to the creature - just let it free! (But NOT in our garden...).

Part 3 Some facts about shrews

1 The place of 'Great White-toothed Shrew' in biological order.

The Great White-toothed Shrew (Crocidura russula) is an insectivore. Insectivores (order Insectivora) are a separate group of little and rather primitive mammals. In the Netherlands we have three families of insectivora: hedgehogs, moles and shrews. A hedgehog with its prickly jacket is well known to everybody. Moles are quite common too, but we usually know about their presence by the mould heaps they make, rather than by actually seeing them. It's because moles live underground. Shrews are not well known which is probably because they are usually considered to be mice. Mice are more being hunted for then observed. There are several kinds of shrews in the Netherlands and they are hard to tell apart. The Eurasian Water Shrew distinguishes itself by black fur, the Common Shrew and the Pygmy Shrew have orange spots on their teeth. Those have at least some specific features to pay attention to. The Great White-toothed Shrew resembles the Lesser White-toothed Shrew and the Bicoloured White-toothed Shrew. 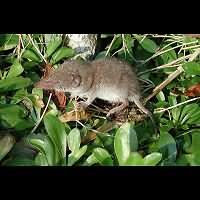 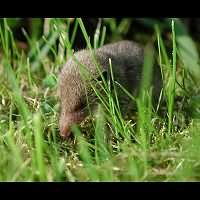 The Great White-toothed Shrew looks very much like a mouse: a dark, grey-brownish on top and light underneath, distinguishable ears and a tail. Ears resemble more the ears of a bat than of a mouse. Actually shrews are closer relatives to bats than to mice! The Great White-toothed Shrew is about 10 cm (4") in length. Its tail is comparatively short - 4 cm (1.5"). The animal has a weight of about 10 grams. Like other shrews and moles it has a long snout with a miniature trunk at the end. Shrews have very small eyes.

Shrews propagate almost the whole year with a short pause during the winter. The pregnancy period is relatively short - about three weeks - and there are five to ten animals at each litter. Shrews make well hidden nests on the ground. 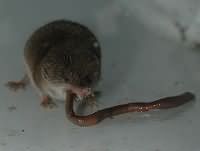 Although shrews are insectivorous, their main source of food is the earthworm. Furthermore they eat snails and slugs and insects. The animals are very small and strikingly busy. This is why they need a lot of food - each day they manage eating twice their own body weight, which comes to 20 grams of food daily. Shrews can live without food for just a few hours and dy of hunger easily. Shrews are also being eaten, especially by barn-owls. Other birds-of-prey don't eat many shrews and carnivors avoid them at all. Cats for instance may play with a shrew and may even kill it, but they'll never eat it. It's because of the shrews nasty scent. Why this doesn't bother barn-owls is not known yet, but Barn-owls themselves also stink horribly.

Shrews are more often heard than seen. They make chattering sounds that can often be heard in the evening. Although shrews are officialy nocturnal animals, they are often active during daytime. They can stand almost motionless for a while. Mothers take good care of the young. In danger they sometimes play a train together: a young shrew holds on to mother's tail, next young holds on to the first young's tail, etc. The caravan of shrews looks like a "train". 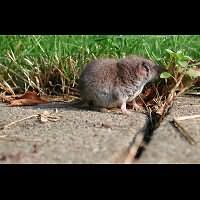 A Great White-toothed Shrew can be spotted during daytime too.

Great White-toothed Shrews can be found in the whole of Europe - with exception for real cold parts in the North and in the mountains - and in North Africa. In the past people thought that shrews occured in small numbers. Now we know better: there are lots of them but because of their habits and conspicuous behaviour they just don't come to our notice.