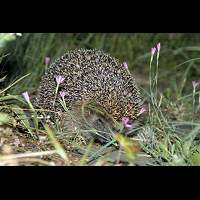 The pictures of garden wildlife on this page are thumbnails. Click on a thumbnail for enlargement in format of 800x600 pixels. The enlarged photos are from 100 to 150KB in size.

Hedgehogs are insect eating mammals (Insectivora), just like moles and shrews. All insectivora are rather small, primitive mammals. They all have a long snout, sharp teeth, rather small ears and very small eyes. All insectivores are ancient mammals, the first appeared on earth some 60 million years ago! Like the other insectivora the hedgehog cannot see very well. They hunt on scent and especially using their ears. In Western Europe, including most of the British Isles there is only one species of hedgehog to be found. From Berlin onwards into Eastern Europa another species is found, called the Eastern Hedgehog. Hedgehogs live all through Europe, Asia and Africa and have been introduced to New Zealand. They are absent in the Americas and the polar areas. The porcupine in Northern and Southern America is not related to the hedgehog at all, even though both groups share the spines. 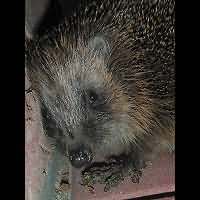 From the head you can tell the relationship with shrews.

1 Hedgehogs in the garden

Being nocturnal animals hedgehogs are not often seen by people. Yet they go their way in great numbers. Hedgehogs however are often heard, for they produce a lot of noise for such a small animal. Looking for food they produce snoaring sounds, a bit like an adult breething through has nose while having a cold. If at night one wanders about under your bedroom window, you might get the impression that there is an adult man about to entering your bedroom through the window! It can be really scary when you are not used to hedgehogs. Heard once chances are you'll be hearing your hedgehog night after night, for they tend to stick around. Since they have but a few enemies, the animals are not very shy. They allow themselves to be approached by humans and only when touched roughly they roll up like a ball in order to protect themselves by means of their spines. You can even attract your hedgehog to come close by by offering dried or canned cat or dog food or some milk on a saucer. But be aware: you will have to buy milk that is especially prepared for animals such as cats, for ordinary cow milk will lead to diarrhea. You can buy this cat milk in every pet shop. After a few days only you will see them at the feeding place every night. Hedgehogs do no harm in your garden. On the contrary: they are quite useful by eating snails and slugs and larvae of insects all the time. They are also fond of moths and moth larvae. If you would like to help your hedgehog even further, you could make a pile of old branches, covered by leafs. This would give your hedgehog a good nesting opportunity. Hedgehogs build a warm and cosy nest to hibernate. The females build a second, less robust nest in spring for their young. Should a hedgehog choose your pile of branches in november or december, then let the animal be and don't disturb it. It is sleeping and prefers to be left alone. It takes energy to walk about in winter and aqctually this energy is wasted when nothing is the matter. For badly nurished hedgehog an unneccessary wake up call by humans in winter could even proof to be fatal. Should you ever envounter such an animal, please contact your nearest local hedgehog rescue. Don't be hasty, for in mild winters you can find hedgehogs walking about regularly. These are not sick or lost, they simply are looking for food! Hedgehogs are able swimmers. Still quite a few of them drown in pools. That is mainly because they are unable to climb out, e.g. because the sides are too slippery. Gradual slopes with mud are the best, but you could make a ramp as well. The hedgehog that people keep as a pet, especially in the USA, is not the European hedgehog, but an African species, the African Pygmy Hedgehog. The wild European hedgehog is not kept as a pet because of its wild nature, the noises it makes and its nocturnal life. 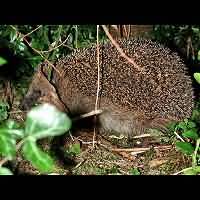 It doesn't happen daily, but sometimes hedgehogs walk about in broad daylight.

Hedgehogs are plump animals with a long snout, small ears and eyes, no tail and a lot of spines on the top of the body. Their closest relatives the Shrews are slender, have no spines, but do have a tail. Hedgehogs are best known because of the long, hard spines. These actually are hardened, hollow hairs. These hairs are dark brown with a light tip and located on the back and sides of the animal. The animal has ordinary soft hairs on both belly and chest. Between the soft hairs and the spines runs a big muscle, which is used to roll into a spiny ball when the animal is threatened. The head and legs completely disappear inside this ball. Once rolled up there are but a few animals that dare to attack our little friend. When walking about the spines point towards eachother, but once rolled up, all spines point outwards. The animal weighs 1 to 1.5 kilograms (2.2 to 3.3 pounds) and measure some 30 centimeters (12") when adult. 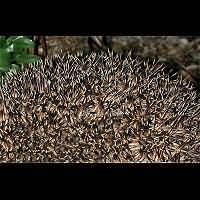 The spines point outwards when the animal rolls up.

Hedgehogs live a solitary life. Because they hear very well, they can hear the presence of another individual from far away. That is why they seldom meet and fight: they simply avoid eachother. Only during the mating seasons males and females tolerate eachother. The mating season lasts only from March untill June. After mating male and female go separate ways again. The females next build a breeding nest, slightly different from the nests in which they hibernate and after some six weeks 3 to 10 young are born. They young still have their eyes closed, but the spines are already there. These however are white and very soft. Some 14 days later the young open their eyes. The mother takes good care of her babies for 6 weeks, after which they have to take care of themselves. The young may stay together for quite some time and may even hibernate together. Usually hedgehogs only litter once a year. 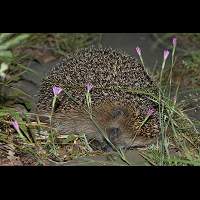 Even though appearing to be rather intelligent, hedgehogs are very primitive mammals.

4 Eating and being eaten

Even though hedgehogs are insectivora they will eat almost anything. On top of the menu are moths and their larvae, followed by earth worms immediately. But they are scavengers as well and will also eat fruit, soft nuts, snails and slugs. They will have a go at eggs as well, even though they are not very good in cracking the scales. Should a hedgehog find a nest of mice or birds, it will not hesitate to eat the young as well. They are fond of adult mice as well, but usually these animals are far too fast for a hedgehog to catch. In a hedgehogs diet there is a special place for beetles. They eat every part of them! It turns out that during digestion some blue acid is produced. Not much, but just enough to kill some of the endoparasites such as worms. In Western Europe adult hedgehogs have but a few enemies. Badgers are the most important ones, but these have become scarce all over Europe. Some bigger birds of prey and some larger owls also eat hedgehogs, but that's it. Not even an adult fox is capable of withstanding the spines. Young hedgehogs whose spines are still soft have many more enemies: foxes, martens and many birds will eat them when they discover the nest. Over 100 years ago man ate hedgehogs as well. Gypsies considered the female hedgehogs to be a delicacy. Nowadays unwillingly humans are the worst enemy: thousands and thousands of hedgehogs are killed each year by cars. In spite of all this hedgehogs are far from rare. And if we keep its interests in mind making a garden, the animal will be with us for ever. 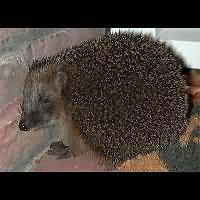 Because of its sharp spines the adult hedgehog has few enemies only.

The hedgehog is one of the few mammals in Central Europe that really hibernates. The temperature of the body drops to about 8 degrees Centigrade (which is some 46 degrees Fahrenheit) during hibernation. The hedgehogs normal temperature is 35 degrees Centigrade (or 95 Fahrenheit), so this temperature drop is substantial. The hedgehog also starts to breath very slowly indeed (3 to 4 times a minute only) and sometimes the animal may be not breathing for almost two minutes. The hearts beats less than 10 times a minute. In this condition the animal may rest motionless for three to our months. The hibernation of the hedgehog resembles that of the frogs very much. Unlike insects that do have a kind of anti-freeze aboard, the hedgehog may not freeze alltogether. Therefor it awakens when the body temperature drops below 8 Celcius (or 46 Fahrenheit). When this happens the animal will walk about trying to locate a better spot to continue its hibernation. The chances of surviving winter are diminished should this happen, for waking up and walking about in the cold takes away lots of the energy the animal has stored in its fat. For their first hibernation young hedgehogs often build a nest together in which they also sleep together. These nest sharing hedgehogs usually are all brothers and sisters. Healthy adults that already survived one winter start to hibernating in November. Young and weak individuals, with less fatt stored in their bodies remain active untill it really gets too cold for them. During mild winters these can be seen, even in broad daylight, till the beginning of January. All animals end hibernating in April. 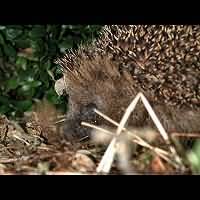 Hedgehogs are always looking for food on the ground.

Hedgehogs can not clean their skin, because of the hard en sharp pines. That's why they often have a lot of parasites on their skin: flees, ticks, mites and fungae. And because they are eating almost anything they also suffer from many endoparasites, such as worms, insectlarvae and bacteria. Many of the individuals seen during day time are so weakened by all these parasites that they are unsuccesfull in finding enough food during the night. The animal doesn't like hot and dry summers either. It is impossible to find any more earth worms, an imporatant source of water. Now man can help his garden friend by offering a saucer of water or specially prepared milk in the evening. Do keep in mind though that ordinary cow's milk may NEVER be fed to the hedgehog, as it will make the animal ill! One might also feed hedgehogs with maggots or worms one can buy in pet shops. But in general extra feedings are not needed. Hedgehogs have been taking care of themselves for 60 million years, so there is no reason to believe they need human intervention at all. In the wild hedgehogs will live for 3 to 5 years. Carefully taken care of in captivity they may reach the age of 10! 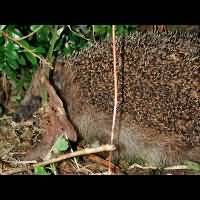 The lower hairs are normal and differ very much from the spines on the back .

Even though hedgehogs do all right in our overpopulated world, they have one big enemy left: cars! Lots of them are killed on our roads each year. Partially it doesn't do a lot of harm, for many of their natural enemies have almost vanished from our civilized world, so cars take over part of the predators role. But given the fact that they are friendly creatures and highly useful in our gardens, it is worthwile saving a wounded, weakened or orphaned hedgehog. If you find a sick or injured hedgehog in Britain, ring for advice or telephone number of a local carer on 01584 890 801.