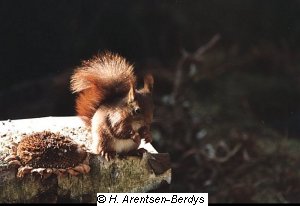 All pictures on this page were taken by Hania Arentsen (photog@gardensafari.net). Please respect her copyrights!

1 Squirrels in the Garden 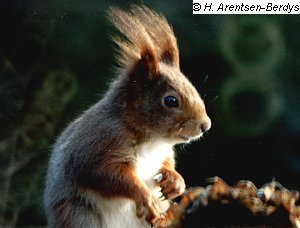 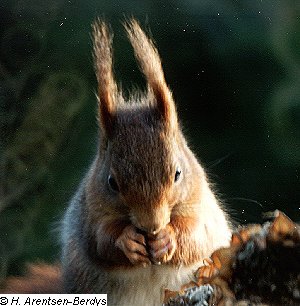 In winter we place a little feeding table for the feathered friends in our front garden. On top of this table we put some small seeds, apples and stuff like that. There are also several net bags with peanuts hanging there waiting for all kind of birds all the time during winter. Now both my wife and myself work and we commute quite some distance so unfortunately we don't see what's going on during daytime. As soon as I return home I check the feeding table, and if necessary clean it up and add some new food. One day I came home and I noticed that all the peanuts were gone from a net I put there just one day before. In the past I had a similar experience with the Great Spotted Woodpecker that tore the nets apart. Putting a blame on the woodpecker I happily hung several new nets and forgot all about the incident. Till next evening when I saw that of the two nets one was empty and the other one had just disappeared! The next day was Saturday and we were at home the whole day long. Soon, as we were drinking our morning coffee, we heard a noise in the front garden. All birds panicked and flew away instantly. And at the same moment we saw the little rascal - a squirrel! It wasn't in a hurry or something. Hanging upside down from the feeding table (funny sight!) it grabbed the peanuts-net using its little hands and put its teeth into the net's content. In this way the peanuts were all gone before we drunk our coffee but at least this time we knew the robber! At some later occasion we saw the squirrels getting more and more experienced with stealing peanuts from the birds. As hanging from the edge of the table was a bit uncomfortable on the long run, the squirrels sat on the table and simply pulled the nets up, put them on the table and... CHARGE! And peanuts have been 'disappearing' from the feeding table in no time ever since. 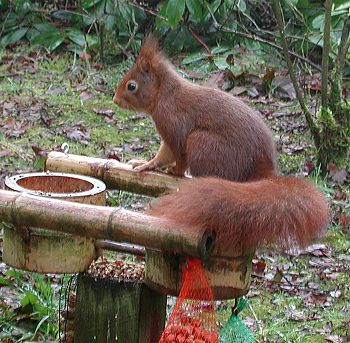 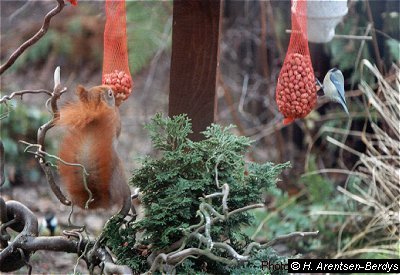 Picture on the right: a daring Blue Titmouse

The maximum number of squirrels we've ever seen in our garden at the same time was four. But it is quite unusual to see more than only one. Once a squirrel has discovered that your garden is a good source of food, it will defend it against other squirrels. However it does sometimes happen that two squirrels accept each other's presence for a certain period of time (perhaps a couple?). 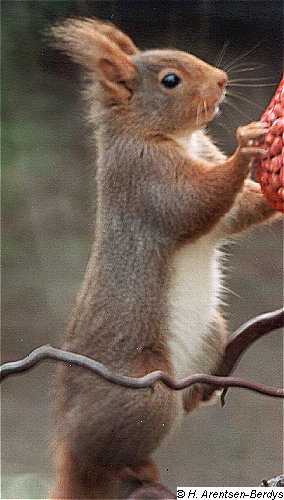 This is a rather grey squirrel

One year we planted a lot of sunflowers in our garden. We planned to pick the heads in autumn, dry them and then feed them to the birds in winter. Our plan succeded only partially. With some flowers still in fool blossom and the seeds hardly even ripe, the Marsh Tit, a frequent visitor of my garden, started to consume them with impressive speed. As a result only one or two heads could actually be saved for winter. Next winter we attached sunflower head onto the bird feeding table and... waited. We didn't have to wait long and 'our' squirrels turned up and for a while they even ignored the peanuts. And in no time the sunflower head was emptied as well. 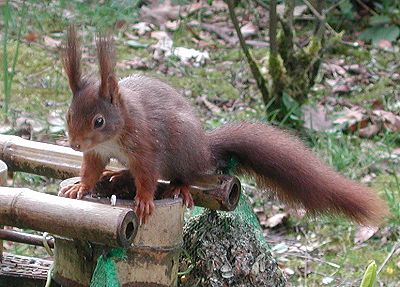 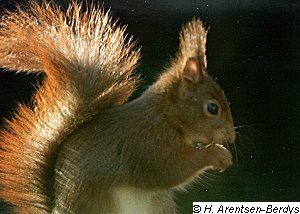 its the little hands and tufts on the ears that makes them so adorable.

Squirrels are great climbers of trees and trees are their favourite habitat. They try to avoid the ground feeling insecure there. As long as the trees are close by they don't mind being on the ground too much. In an open area they act nervously, taking a few steps and then standing up, either out of breath because of the unusual excercise of moving horizontally, or on the watch for enemies. Birds of prey like the Goshawk would eat a squirrel when given the chance. Anyway on the ground the squirrel is not half as fast as it is in trees. 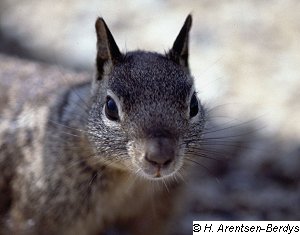 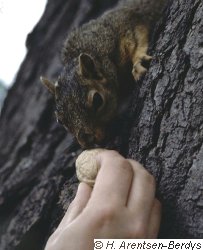 A Grey or American Squirrel (Sciurus carolinensis) is much easier to approach.

The European Red Squirrel is more beautiful than the American Grey Squirrel. First of all it is smaller, its colours are more vivid, its tail is more impressive and the little creature moves a bit more elegantly. On the other hand, American Squirrels are much easier for people to observe. The species is more approachable than the European Squirrel. For instance American Groundsquirrels can almost be tamed. Behavour of squirrels also depends on the part of Europe you live in. The more the animal used to be hunted the more shy and frightend it behaves. All squirrels have one common property that tends to melt a person's heart: the claws are used just like people use their hands. They hold on with them to trees and branches, but when they find food, they actually sit down and start to eat, holding their food in their little hands just like people who eat an apple do. 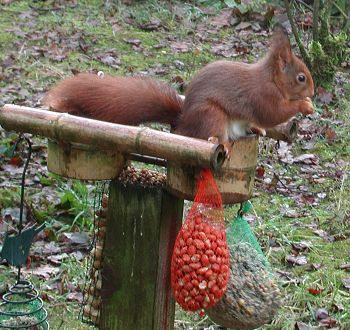 A feeding table can be used as a chair as well, of course.

A less adorable feature of squirrels is their love for birds' eggs. And here you see how they probably succeed in robbing the eggs from birds' nests that look illusory secure in a hole of a tree... The squirrel above seeked shelter in the box on cold days and nights in winter. After the winter we haven't seen it near the box any more. As you probably notice the hole in the box used to be much smaller. Both the Great Spotted Woodpecker and the Great Tit enlarged it considerably, although none of those ever had a nest in it. 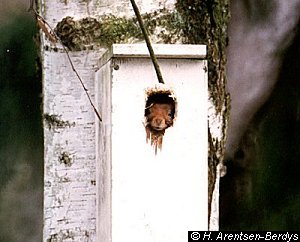 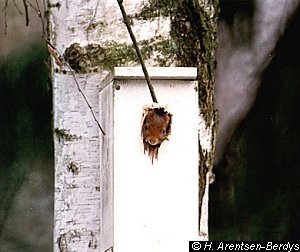 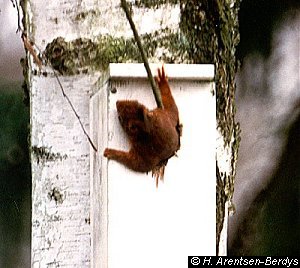 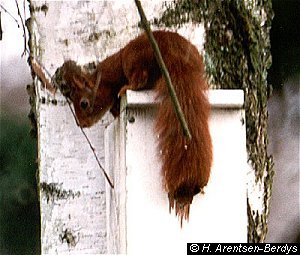 This squirrel had its own Winter Palace

Observing squirrels in your garden is a wonderful and fascinating experience. Their presence always attract your attention and they never stop to amuse you. From our experience squirrels are far from rare in Holland, but of course you need the right environment to attract them. Besides they don't show up too often and you can never predict whether or when they will pop up. Only in winter, provided that you put the right food, you will be able to enjoy its presence in your garden regularly.

1 Place of the squirrel in the biological order

Squirrel is a mammal and belongs to the large group of mammals called rodents. Beavers, mice and rats are rodents as well. Within the rodents, squirrels belong to their own family. The species that lives in our country is the European Red Squirrel (scientific name: Sciurus vulgaris russus) is the only original squirrel in Western Europe. In England the American squirrel (Sciurus carolinensis) was introduced in the past. Being bigger and less shy towards people this 'foreigner' has dominated the area and drove the original European squirrel to the north. This is how it came about that the remaining population of squirrels in the UK can be found almost only in Scotland. The introduction of the European House Sparrow in the USA resulted in a similar kind of drama, not to mention the disaster that occured by bringing European rabbits to Australia... 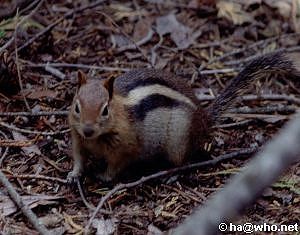 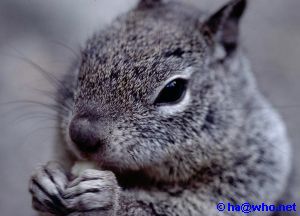 Chipmunks and groundsquirrels are members of the squirrel family too.

The back of our squirrels is reddish brown, the chest and belly are white. There is a very sharp border between the two colours. As the animals get older they slowly turn more and more grey, very old ones give a distinct grey impression. In eastern Europe squirrels tend to be more grey, in mountain areas however they are a bit black. They have a long tufted tail, which measures about 50% of their entire body length. The colour of the tail may vary: some have black, others have red tails, while many have greyish tails. Their ears look bigger than they actually are, because they are tufted too. The animals have a total length of about 40 centimeters en weigh about 400 grams. They can reach the age of 5, although this rarely is the case in the wild.

Squirrels mate in january or february and mothers bear for five to six weeks. Then 3 to 6 naked and blind young are born. It takes about a month before they are able to see. Squirrels might litter twice a year. They make a very large nest of branches and leaves up in trees. The nest has only one opening. 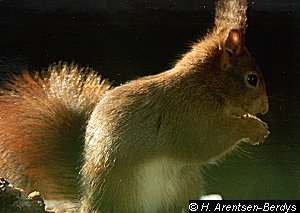 He's the star of this page: the Red or European Squirrel (Sciurus vulgaris russus)

Even though the squirrel belongs to the rodents, which are almost all vegetarians, given the chance it will sometimes eat meat as well. Especially in springtime it can harm the nests of birds by eating eggs or young, just like the Jays and Magpies do. But the rest of the year squirrels normally feed on all kinds of seeds. They are very fond of the seeds in pine-cones. The American squirrel is not capable of opening all the pine-cones and that's the reason European squirrels survived in the northern part of the UK.

A squirrel can make gigantic leaps from one tree to another. its often difficult to observe squirrels in the wild as they climb up or down a tree on the side of the tree that you can't see. A squirrel can be tamed a bit, especially in areas where it is not hunted, but it is never as tame and dependent on people as the grey American squirrels are. While eating, the front legs are being used as hands, which gives a kind of humanlike impression. A squirrel does not hibernate in winter, even though in cold periods it sometimes doesn't leave its nest for weeks. In autumn squirrels tug away seeds everywhere. This stored food can then be eaten in winter, provided that they still remember where it was hidden...

Lives in Europe, Asia (north of the Himalayas) and in Northern China. Does not live in mountain areas above the elevation of 1200 meters, except for the Alps were it lives up to an altitude of 2000 meters. 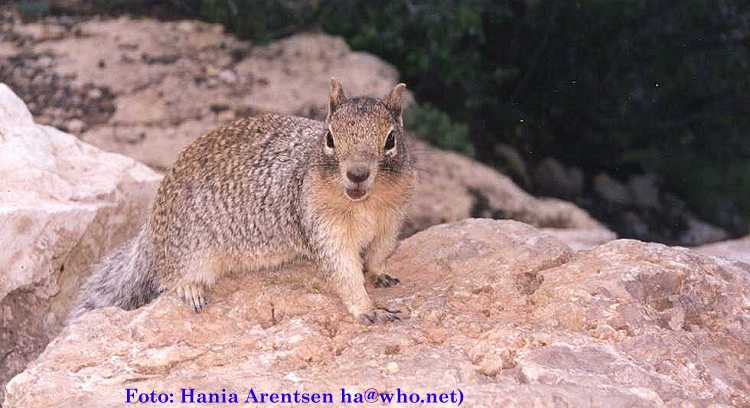 Groundsquirrels can also climb although they do not live in trees but on rocky shores and in the mountains. This one was photographed on the very edge of the Grand Canyon, USA.

Sometimes one encounters wounded or sick squirrels. And occasionally the young may fall out of their nest, for instance after a heavy storm. Don't try to take care of a young squirrel yourself, for squirrels are not domesticated animals like dogs or cats. Besides: ordinary milk might kill them, so never use that. Adults do appreciate goat's milk for instance, but young ones do need milk especially prepared for them. The best you can do for your squirrel is by surfing to the site below and following their instructions. This site is useful for surfers from the UK, the USA and Canada alike.