Pseudoscorpions, also known as False Scorpions, are the least known Arthropods. They are all very tiny indeed. The biggest is less than one centimeter long but most of them are only 2 milimeters long. They resemble the actual scorpions very much except that they lack the poisonous tail. Just like scorpions and crabs they have the front legs in form of scissors which are poisonous. All spieces are preditors. The tiniest ones can even be found on paper of books where they hunt for bookworms. In Britain there are about 25 species, most of those being real look-a-likes. Many can be found by turning rocks, leaves or by peeling loose barks, but because of there size and colours they are easily overlooked. These species are mainly dark brown with reddish brown pincers. They feed on very small insects. Often the species can be only told apart after microscopic research. 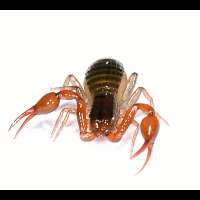 One of about ten species of Moss Scorpion. They are all extremely similar. More... 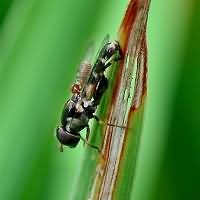 The Knotty Shining Claw regularly is seen stealing a ride from an insect. More...