Spiders and such (Arachnida)

It is considered to be easy: all small animals with 6 legs are insects and all small animals with 8 legs are spider like arthropods. But actually possessing 8 legs do not mean that these animals are closely related as the insects are. Yet it is a practical solution to separate the huge amount of species found in insects. Small animals walking on 8 legs are usually well known: spiders, harvestmen, scorpions and ticks. Yet the animals differ considerably from oneanother. Spiders have a body consisting of three parts, like insects have: head, thorax and abdomen. The head and thorax however have fused into one visible structure called the cephalothorax. Ticks have only two bodyparts: head and body. Harvestmen even consist of one part, the body, only. From this it is obvious these animals are not closely related at all. Oh, by the way: even these 8 legs are not always there. A newly born mite or tick has 6 legs only. Worldwide there are many spiders indeed. The number of mites is considerably as well, even though many are rarely ever seen. They are small and most are parasites to mammals, birds or insects. There are far less harvestmen species. Of the pseudoscorpions only some 15 species are present in the Benelux. Many spiders and harvestmen are quite big. Pseudoscorpions and mites are much smaller. Many species can hardly be seen by the naked eye. 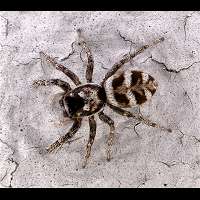 Spiders in and around the house Araneae

On this site the section on spiders has been split up in two separate pages. On this page we deal with spiders usually found inside the house, or on the walls. A second page is devoted to spiders mainly found in the garden. The two pages do overlap, for some spiders like both: the wall of a house and the tree trunk in the garden. But most of the spiders on this page never go far from a house or shed. 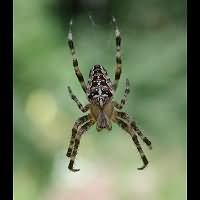 Spiders in the garden Araneae

The spiders on the following page are mainly found in the garden. They maybe seen on a wall or fence every now and then, but usually they are in or around the vegetation of your garden. But they not only live in gardens, you can see them in the wild as well. Only very few species actually are garden specialists.

Mites and ticks are very small indeed. Many species can not be seen without the aid of a microscope. Many mites cause diseases in animals and plants. The so-called witch's broom in plants are often caused by mites. And many people are allergic to the house mite. Ticks usually suck blood from other animals (including humans) and some species may transfer awful diseases while doing so, such as Lyme's disease. 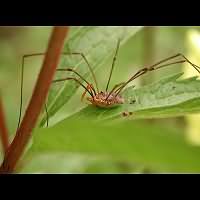 Harvestmen are very common on walls of houses and sheds and in gardens. Readily identified by the small round body in the middle of eight extremely long and thin legs. Harvestmen do no harm to your garden, for they are hunters, preying on small insects mainly. There are short-legged species as well and these may be hard to identify at first. 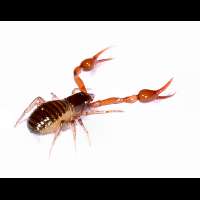 The creepy scorpion in the picture is a pseudoscorpion. And yes, it is very common, even in your garden.! It may even walk about in your books! However it can't do any harm to humans. It is smaller than a tick and its impressive scissors are unable to penetrate human skin. To small insects and springtails however this is a lethal enemy. The brown pseudoscorpion in the picture is often referred to as moss scorpion, for it is usually found in mosses.